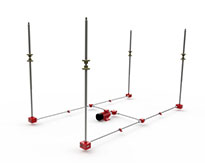 Power Jacks engineers had just three weeks to devise and deliver a custom-built system for a top European car manufacturer who were launching a new model in a spectacular display.

The system centred around the C-Series cubic machine screw jack and was pivotal to a dramatic ‘magic mirror’ effect that slowly unveiled the car. The car sat inside a ring of pillars of coloured LED light, and was covered by a mirrored box that had a horizontal split. To make the car appear and disappear, the sides of the box were moved up and down in synchronisation so the top and bottom halves of the car were revealed at the same time. To keep the mirror operation simple yet effective, Power Jacks engineers opted to use a four screw jack system in an H-configuration.

The design needed to move two platforms in opposite directions, at the same time and rate. To achieve this, Power Jacks designed a special lead screw which had right hand and left hand threads on the same lead screw, built into the screw jack body. The screw length matched the height of the installation: the upper half had a right hand thread form and the lower half had a left hand thread form. A lead nut with corresponding thread ran on each thread form portion of the screw, so each screw in effect had two lead nuts. Therefore the system had eight lead nuts in total (two per screw jack) - four connected to the top mirror section and four to the bottom mirror section. As the jacking system was operated, the nuts ran in opposing directions so the mirror sections did likewise at the same speed in a mechanically synchronised manner.

By using a mechanically linked system, the whole operation was controlled by one motor which greatly simplified the control system and minimised costs. The four C-Series cubic machine screw jacks selected for the system were mechanically linked to the electric motor via three bevel gearboxes from the ultra compact Neeter Drive Range-N design. 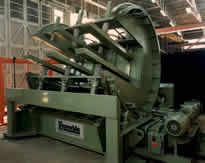 Pairs of screw jacks are used to move the clamp arms in and out to clamp and release the stack of metal sheet before and after turning through 90 degrees.

Controlled movement and indexing of paint spray nozzles in streamlined spray booth. Units needed reliability for working in an environment that required the units to work up to 16 hours a day continuously. 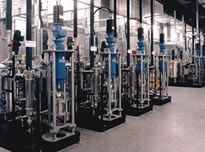 The Rolaram® linear actuator was selected to drive the reciprocating, double acting paint pump. A total of 31 pumps and actuator systems are in use at the paint shop at BMW Mini Oxford, which was the first all-electric paint mix facility in Europe. 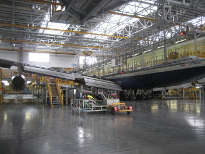 The BA Cardiff maintenance facility is the central area for maintaining their fleet of aircraft. During maintenance periods it is Power Jacks screw jacks that they rely on to position key equipment. Aircraft jacking system using E-Series screw jacks to position platforms designed to support the total weight of a Boeing 747 and 777’s to allow total under body and wing maintenance as well as allowing “levelling” of the whole aircraft. Overhead Roller Screw Jack controlled platforms for fuselage and tail areas, which enabled corrective work to take place safely throughout the top surface of the aircraft. In addition mobile access platforms for engines etc, also use E-Series screw jack systems for positioning.

See it in action in Jumbo Jet Strip Down documentary. 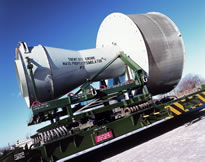 A three point lift system was devised using three screw jacks connected in a system by bevel gearboxes, couplings and drive shafts. The system was designed to be quick and easy to use by hand operation while being selflocking.

Using 50kN E-Series metric machine screw jacks of the type KTE1805 keyed were used. The 24:1 gear ratio combined with the 9mm lead on the screw provided a mechanism that was self-locking and minimum torque input for hand operation. Worm shafts are chrome plated and the screw is protected by a PVC bellows boot for protection and anti-corrosion. The system also uses two Neeter Drive range-N series 35 bevel gearboxes with a 3-way solid shaft model 35341M and 1:1 gear ratio configuration.

The screw jacks can be individually motorised or driven as a mechanically linked system. Safety features that can be employed include safety nuts, brakes and wear monitors. The picture opposite shows jacking systems lifting the aircraft access structure (tail dock) for a jumbo jet. 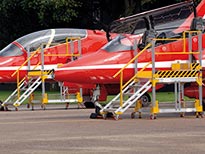 Improving the access platform used by pilots to enter and exit the cockpit of their special jet airplanes.

These platforms need to provide a safe access route to the cockpit that can be adjusted to the right height for each plane given varying ground conditions and pilot size. Once in position these platforms must lock securely and safely to prevent any accidental damage to the plane occurring.

All railway carriage bogie drop and jack systems are designed to be extremely strong, simple and very safe.

For the complete range of brochures, datasheets, videos and more go to the Downloads page